A few weeks ago, a client asked me to review his SLC-500 program files. He wanted my advice on how difficult it would be to convert them to CompactLogix.

UPDATE – November 2021 by SMT: Rockwell no longer makers the Translation Tool or Project Migrator available as a download, so if you don't have either in your RSLogix/Studio 5000 installation files or discs, you can try the “new” feature in RSLogix500 v12 and RSLogix5 v10 which allows you to save your program as a Logix file by using the “save as type” menu option, and choosing “Logix Designer Files (*.ACD)” For more information see the free tech note below:

When I received his files, the first thing I did was power on my primary Windows 7 64bit virtual machine. Then I opened each of his .RSS files in RSLogix 500 v9, and saved them in the .SLC format required by Rockwell's “Translate PLC-5 SLC 2.0” utility.

Next, as I attempted to translate the first .SLC file using the utility, I received the following error: “Syntax Error at line 7.” As I tried each of the remaining files I received similar errors. 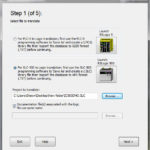 With no obvious solution, I headed off to Rockwell's knowledgebase to see if there was a documented fix. I tried several different keyword searches, but found nothing related to this error.

Frustrated, I booted my Windows XP Pro 32bit virtual machine up. Then I ran thought the entire process again with RSLogix 500 version 8.3. This time all of the files converted successfully.

I didn't think about this again until a couple of weeks later when a different client called frustrated with the same issue. I told him I'd also had this problem and thought I had found a workaround. Since the client was in the field, I offered to do the conversion for him and a short while later his file appeared in my email inbox. 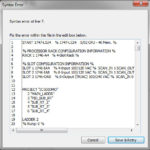 This time I went directly to my Windows XP Pro vm, and ran through the same procedure as before. However, I expectantly received the same error that I had previously only seen in Windows 7. Not knowing really what to do, I tried importing the .SLC back into RSLogix 500 v8.3, and then re-exporting it to a .SLC file. Surprisingly this worked, and I was able to send the client back the converted file.

Not seeing a patterned, and previously not finding anything on Rockwell's Knowledgebase, I thought it time to call Rockwell's Tech Support. When I explained the issue to the Tech on the phone, he said there was an internal Tech Note about this issue. He said the quickest fix was to open the .SLC file in a text editor and delete all the lines pertinent to the I/O configuration.

I thanked him for the suggestion, and left them with one of my own. I asked him to consider making a public Knowledgebase document on this issue to help others who might also run into it. To his credit, a  couple of days later he left me a voicemail saying a newly published tech note addressing this issue had been created: Rockwell Tech Note 576939 (this tech note currently requires a Tech Connect contract.) 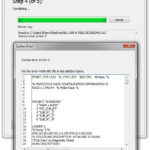 Now whenever I run into a frustrating issue like this, I try to write up a quick email and send it out to my colleagues. My hope in doing this is to save them from having to troubleshoot the same issue I did.

This time, shortly after sending my email, I received a reply from my colleague Joe. He wrote me back saying he had run into the same issue in the past, but had come across an easier solution.

If you look closely at the Translate PLC-5 SLC 2.0 Utility error window, you'll notice a small line of text right above the white text box which reads, “Fix the error within the file in the edit box below.” I would never have guessed that the white text box was editable, since most of these popups are just simple notification windows. But as Joe rightly pointed out, you can simply delete the offending I/O lines right from this window, and then continue on with the conversion successfully.

To be honest, I'm still not sure what causes this error in Rockwell's “Translate PLC-5 SLC 2.0.” utility. But knowing the above work-arounds has turned out to be quite helpful.

If you also find these work-arounds helpful, please take a moment and visit our Support page for several ideas on how you can help us. 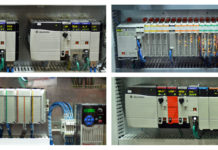 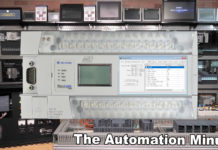 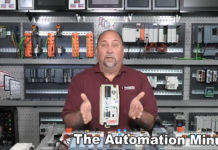 Get Data From MicroLogix via Modbus and NET-AIC?

Kristen Kosatka of Rockwell Automation comes on the show this END_OF_DOCUMENT_TOKEN_TO_BE_REPLACED

I answer three reader’s questions on Studio 5000, the PanelView END_OF_DOCUMENT_TOKEN_TO_BE_REPLACED

Generally, when I am loading software on a computer, that END_OF_DOCUMENT_TOKEN_TO_BE_REPLACED 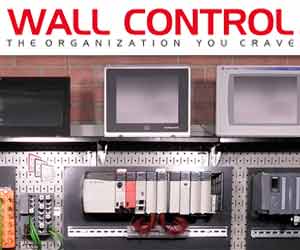 Plug and Play with Allen-Bradley Devices

Pre-order my CompactLogix Training Course to save over 70%!